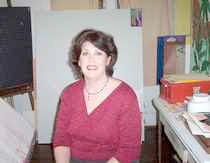 Most parents take their children to the library or museum to learn more about history. Julia Morgan-Scott’s mother, however, took her to old cemeteries.

“She was always into history,” she said. “Graveyards are wonderful places to find out about the past.”

Ms. Scott, a local illustrator and writer, used those mother-daughter excursions to cemeteries in a career in – what else – horror. Over the last 20 years, the self-described “Goth Granny” has painted a niche in the horror art genre. “I’m just morbid,” she said. “I’m just an old-fashioned girl in-love with death.”

Ms. Scott is one of three horror writers/artists featured at the first annual Halloween ’03 Medieval Fantasy and Gothic Horror Convention on Oct. 24-26 at the Comfort Inn. “They’ll all be taking part in … telling ghost stories,” said L.D. “Dutch” Stacy, Hallowcon CEO. Stacy knew Ms. Scott from fantasy and science fiction conferences they both attended. He said Halloween differs from those conferences because it features medieval horror instead of Sci-Fi. “The type of horror we’re going with is not the slasher type,” he said. “It’s medieval type fantasy, like ‘Lord of the Rings’.”

Hallowcon’s medieval-horror theme, Ms. Scott said, makes it a perfect venue for her. “We’ll be on a panel, talking about where we get our horror ideas,” she said.

Ms. Scott’s illustrations have not only appeared on magazine covers, but also in scientific journals and textbooks.

Ms. Scott decided to pursue a career as an artist while on a trip to Europe at age 18. There, she was especially impressed by the Italian Renaissance paintings she saw in Florence at the Uffizzi art gallery.

“It really moved me to be able to do what those artists did,” she said. “It was always my goal to paint something that beautiful.”

Yet, life took its toll on Ms. Scott and pursuits as an artist. She went to college, fell in-love, got married, left school, had a child, then got a divorce.

As a divorced single mom, she felt like “an overweight house wife” who needed to create a new identity for herself, she said.

“I said, ‘I want to be an artist’. I guess that was my subconscious speaking.”

She went back to school and earned an art degree in 1984 from U.T. Chattanooga. Getting back to art, she said, gave her self-esteem she needed.

Her illustrations were first published in Cerebus, an independent comic. Since then, her art has been published in Aberrations, Flesh & Blood, and Deathrealm magazines.

Ms. Scott has illustrated game art for Warlords and 7th Seas, but found the game industry difficult to enter. Oddly, gaming companies rejected her drawings, she said, because they weren’t dark enough for their markets.

“I wasn’t able to do the kind of art they wanted … too romantic” she said.

She has written numerous horror stories alone and with fellow Hallowcon guest, Lawrence Barker. She did the cover art for Barker’s history/horror novel, “I’ll Take My Stand.”

Her Gothic poetry has appeared in Penny Dreadful, Seductive Torture Vampire Tales, and The Darker Woods. Scavenger Newsletter wrote that her poetic tone and style had a “Poelike flavor” and “themes of destructive royal pride and stately horror he would’ve admired.”

Ms. Scott is an illustrator for UTC’s Biology Department. She illustrates fossils and bones under a grant-based program, she said.

She has two adult children and three grandchildren. Two of her grandchildren attend Sci-Fi conventions with her and husband, Ken Scott. Her son, Alex, wants to be a Sci-Fi writer. The 21-year-old is a creative writing major at UTC. She said he’s studying science and anthropology to enhance his genre writing.

“I warned him that not everybody in the university would be friendly to the effort,” she said. “They think it’s just a cheesy waste of time.”

Ms. Scott is wasting no time trying to widen her horizons. She’s delving into more fantasy and surreal paintings than horror and Sci-Fi. She’s also doing more writing than before.