By the time I got my degree from the University of Tennessee at Chattanooga, I already had a few illustration jobs under my belt. After that, I was mostly a stay­at­home mom for the next 10 years. Then in 1994, I bought an airbrush, painted two pictures while my son was at school, and entered them in the art show at Dragoncon, Atlanta’s huge multimedia convention. When I filled out the entry form, I called myself a “professional illustrator” and, to my vast surprise, received a first and second place prize! I’ve been a working artist ever since.

My imagery reflects sources from mythological and religious iconography from Western, Asian and ancient sources. I draw my inspiration from many sources: the Renaissance; 19th Century French Salon painters and the English Pre­Raphaelites; 20th Century Surrealists and Symbolists; and the wonderful illustrators of fantasy and science fiction. Now, in the 21st Century, I’m newly inspired by the fresh energy of the Outsider and Kitsch movements.

My first real sale was a comic I wrote and illustrated, but I’ve drawn caricatures outside in 100­ degree ­weather, retouched photos, illustrated game cards and horror novels, painted icons in egg tempera, and portraits in oils. My Gothic poetry and short stories, some of it dark and disturbing, some absurdly humorous, have been published in numerous small press magazines and widely reviewed online.

I’ve been a scientific illustrator at the University of Tennessee at Chattanooga for almost twenty years: I literally wandered in off the street holding a poster I’d found that read, “Can You Draw?” I’m a member of the Guild of Natural Science Illustrators and my drawings of fossil and living mammals have appeared in many scientific journals and books. 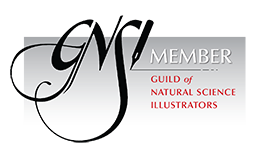